This 1984 UNH Rap is the Greatest thing ever.

I need to hear this at every party I attend for the rest of my life. I need to hear if these guys have more recordings. Amazing. FEEL THE FUNK! ... also, apparently UNH hasn't changed. There was no parking in 1984 either.

EDIT:
I'm putting my research skills to good use. I will update as I see fit. Found this image: 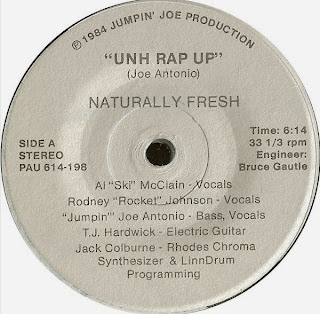 Yours Truly, The New Hampshirite at 10:01 AM 0 comments

Here I am, minding my own business working on a major research project for one of my graduate classes and I ran into a little obstacle. I'm searching for some full text articles via the library databases and I click a link to one of the articles...

Ouch government. Things just got real. I hope you're happy with yourselves.
Yours Truly, The New Hampshirite at 12:39 PM 0 comments

I have a confession to make...

I could not honestly name one song by Kendrick Lamar. Maybe I would recognize one, but I have no idea who he is or what he has done. In the past, I have taken SCOPE's side and this isn't even a knock on them. I think it simply shows how out of touch I am. And that is all I have to say about that.

Like I said in my comeback post I am old and I don't know what is cool.

But I do know one thing.

Hockey starts soonish, so who is giving me tickets? Because even though grad students have to pay a some student activity and athletic fees and all that shit, I don't get hockey tickets or discounted concert tickets. So fuck this and fuck that.

Grad school is insane. I've had nothing to blog. I read and write papers all week and then drink till I forget it all on the weekends. UNH's wifi was down a bunch today, so let's see what Twitter had to say... 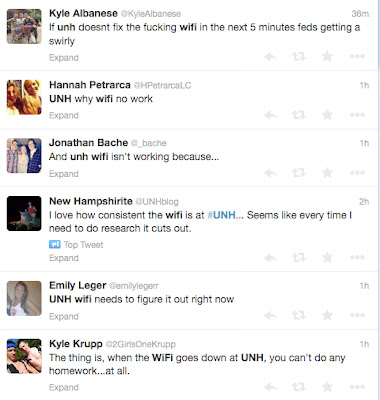 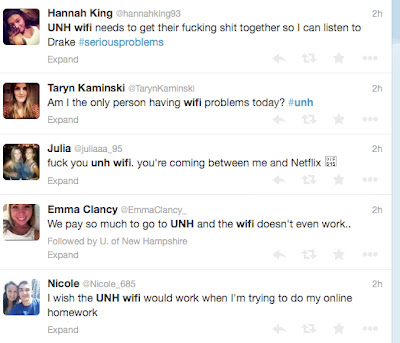 Yours Truly, The New Hampshirite at 5:34 PM 2 comments


If there are still some people out there who care, I'm making a comeback bitches. Even with my past antics and horrible grammar, UNH has decided to allow me to return as a grad student. Getting my Master's motherfuckers. I doubt I'll be blogging much, it seems weird as a grad student, but who knows really. My twitter will definitely be more active once the year begins.

I'm so excited to return to celebrating the almighty thirsty Thursdays. If I can figure out this new blogger format, the year doesn't prove too difficult and nonsensical happenings occur, the blog may see some activity... I really missed out on some good material last year. I didn't follow that whole thing with SCOPE or the logo-gate too closely, so feel free to  fill me in on those or anything else about UNH that I've missed.

I have so many questions.

Are baggy pants in or out? I feel like I've been away for so long. I'm old and confused. I'm tired. It's past my bedtime I think. GET OFF MY LAWN.

I feel like it's my freshman year all over again. Except this time I have an idea how college works. I don't think I'll resort to starting a blog again this time around. So cool with the ladies. This guy.

Is anyone reading this? Or did all my followers all graduate too? Can grad students get free hockey tickets, or am I gonna have to trade bottles of vodka to freshman for them?

Is "that's what she said" still a thing? Do these new collegians get that reference or is it too old? Can I make Zoolander jokes? Spinal Tap? Monty Python and the Holy Grail? I didn't see the Hangover 3 so shut up!

What musician is in right now? Who do I complain about SCOPE not getting this year...

I feel like I need a pop culture and college life orientation. But one aimed for people who already did college and took a year off. I'm gonna be that old guy in class. And yes. I probably am checking you out.


Well it's been almost a month since graduation and I think I'm starting to get accustomed to this whole "post-college real world thing." A few minor adjustments to my living style have changed and I'm learning as I go. For example, I've learned that my parents aren't as cool as my roommates were with me waking up passed out next to the fire pit with a empty fifth of Jack Honey in my hand, but other than that the past month as "The Living in my Parent's Basement-ite" has gone swimmingly. Literally. They were none to pleased when I fell out of my kayak either. According to them, no, the fishies do not want a sip of my gin and tonic.

Anyways, this blog is not dead... yet. I have one more final post in the works, but until then, I give you some of my personal favorite posts/moments in the history of the University of Nonsensical Happenings. Picking these was a lot harder than I expected and I'm sure I missed some, but it was nice looking back over the last few years. In no particular order, let's take a gander, shall we?

The events last fall surrounding the Gables and Woodsides quiet hours being restored. I had a handful of posts on this and, not to toot my own horn, I think it's safe to say my column in TNH, which caught the attention of housing and my subsequent meeting with them got the ball rolling. Soon after my meeting housing reissued a new survey and quickly restored the original quite hours.

My post on the hazing incident with CommUNHiversity. What I loved about this was how a reader/tipster stepped up and helped me get the PDF of the file report and it led to some intersting comments.This also showed how hazing (no matter the level of it) isn't just restricted to Greek Life.

My Surviving UNH tab. I spent some time one summer to put this together by combining past posts and columns and well as original content. I think it was around 14 pages in word when I first posted it. I've revised parts of it several times and I think it is my most useful work on this blog.

I don't think I have ever written something this great, but finding it on Craigslist was amazing.

Because forts are awesome. Not so much about the post, but the epic times that we had in this. Kinda more of an insider for my roommates and close friends.

And who can forget all my encounters with dining, the interesting Stephenson Billings and also my recent Q&As with some hockey players were also quite interesting.

Until next time - one last time-

Stay Classy, not UMassy.
(I will have one more post eventually!)
Yours Truly, The New Hampshirite at 8:03 PM 6 comments 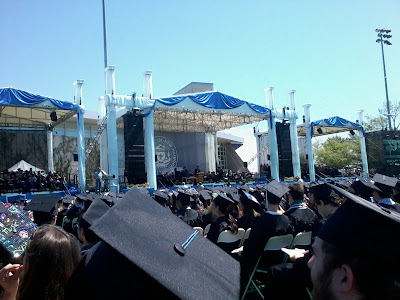 My view from one of the COLA sections.


I just got back to my apartment from commencement and wanted to share a few thoughts. While I thought some of speeches dragged on a bit, and others just seemed plain awkward, I really enjoy the Key Note speaker Ron Noble. Some people felt he only talked about himself, but I was fascinated by his story. It really shows that you can achieve great things you never expected... but I'm sure going to Stanford helped. (Calm down WSBE grads...) Maybe the message from Ronald Noble was saying "Experience it for yourself." Also, his moment of silence for Greenland police chief Michael Maloney was very nice. I'm happy there were any idiotic shouts during it (No matter what, that seems to always happen). It may have been the quietest moment of silence I've ever heard, which says a lot about UNH and our graduating class. And even if you didn't like him you have to admit, those snipers and security force was pretty badass.


I was lucky to have a decent group of people around me, but it only takes one or two people to take the enjoyment out of a great ceremony. During the entire second half of commencement this one kid kept blaming UNH (and just about every speak) for his COLA degree being worthless. Hey buddy, you got to pick your own major. It's your fault. Also, no degree is worthless if it is something you truly care about. Money isn't everything, but finding your passion in life is. I'm sorry your not mature enough to keep your mouth shut and let the people around you enjoy themselves. I'm sure that will really help you during the whole job search.

I am now officially a UNH alum and this blog is on it's final legs. I'm planning a few more posts to wrap things up over the next week or so, so don't check out just yet.

Stay classy, not UMassy.
Yours Truly, The New Hampshirite at 1:39 PM 0 comments

The New Hampshirite
I am a UNH Grad student, who lives off coffee, alcohol and ramen. Just trying to make sense of our nonsensical world one post at a time. I wrote this as an undergrad. Now I'm back for seconds.